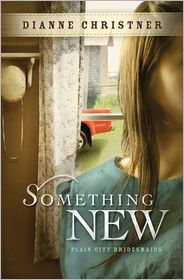 Something New by Dianne Christner is a bit of a mixed bag.  In some parts it is so perfectly written that you practically forget you are reading a piece of fiction.  You begin to believe the characters are real, even thinking about them long after you've put the book down.  But, there are times when the plot moves along so tediously you also begin to wonder why you even picked the book up in the first place.  Luckily, these moments are few and far between, and Something New ultimately delivers an interesting take on a classic coming of age romance story.

Lillian Landis, a conservative Mennonite in Plain City, Ohio, has a dream that runs against the grain of her simple faith.  As a child she has always craved excitement and attention, pursuing a culinary degree despite the wishes of her parents.  Lillian is on her way to reaching her dreams and making head chef when she is forced to return home to care for her clinically depressed mother.  After a series of unlikely circumstances, Lil begins a romance with a veterinary student who does not adhere to the same conservative values as her family.  As she begins to explore the desires of her heart, Lil discovers that the path she has set herself on might not be the same one that God has planned for her life.

I greatly enjoyed the detailed look into the conservative Mennonite faith that author Dianne Christner provides.  Most of the characters were well written and believable, although a few of them could have used a bit more development in order for the reader to care about them.  Lillian is a very likeable protagonist, and I often found myself rooting for her and Fletch, hoping that somehow God would weave their hearts together despite the many circumstances that developed to keep them apart.  Also, I found it a fun coincidence that both main characters had careers that I at one point intended to pursue, so I did relate to them in a way that others might not.  Lil is constantly cooking and I enjoyed all the culinary talk, including the extra recipes tucked away in the back of the novel.  Moreover, the spiritual growth that both characters experienced was fulfilling to read, even though things seemed to clean up just a little bit too easily in the end.

Something New does offer "something new" to the world of Christian fiction, and I am happy to recommend it.  It is book number two in the Plain City series, and I look forward to reading the conclusion as soon as it is available.

Disclosure of Material: I received a complimentary copy of this book from Barbour Publishing, Inc. I was not required to write a positive review. The opinions I have expressed are my own.
Posted by Rene at 5:33 PM