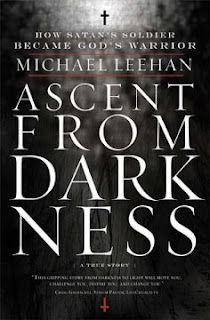 Satan is real, if you had any doubts.

In Ascent From Darkness: How Satan's Solider Became God's Warrior, Michael Leehan details his twenty year journey into Satanism and how the God of mercy and grace rescued him from the pit.  The testimony of Leehan is incredible, showing how God is relentless in his pursuit of us and the power Light has over darkness.  Oh, but the darkness is so black, and Ascent is at times almost impossible to read, lifting back the curtain on a spiritual battle that is raging for the souls of men, and exposing an adversary so evil that the darkness almost seeps from the pages of this biography.

How does one turn to Satanism?  Michael Leehan takes the reader down a dark and twisted path of depression, lies and despair.  Raised by unloving parents who only paid lip service to their faith, Leehan is reckless and troubled, already addicted to alcohol and prescription medications by the time he is twenty.  After a series of near fatal accidents and a painful divorce, Leehan gives himself over to the Devil to do as he wills.  In gruesome detail, Leehan describes the dark spirit of power that comes over him as he pledges his life to Satan, offering his own blood as a sacrifice of allegiance.  Over the next twenty years Leehan gives his soul over to the dark side, praying to demons and offering animal sacrifices on demonic altars.  He falls into "hell on Earth" as a slave to his flesh, overcome with visions of murder, suicide and lustful passions, often spending time in jail and isolated.  The bottom drops out when Leehan hears Satan tell him to murder the pastor of the church his daughter and girlfriend attend.  With weapons and ammunition hidden under his coat, Leehan waits for the pastor to end his sermon so that he can finish the evil assignment.  The events that follow can only be attributed to the transforming power of Jesus Christ and the love he pours out of His people, the Church.

Leehan's account is remarkable, but I often struggled with it.  There was a lack of cohesiveness with the content and the author often jumped around, making it difficult to place the order of events that were occurring.  Another difficulty was reconciling Leehan's fascination with both Christianity and Satan.  I suppose the two go hand in hand, as God and Satan have been battling over creation since the Garden of Eden, thankfully we know who wins!  But Leehan felt as if his Satanic mission was to infiltrate churches, seeking out believers who were weak, unsure of their theology and teetering on the edge of the world.  He openly explains how he would memorize Scripture with the intent to twist it, spewing lies into the hearts of those who claimed to know Christ.  He also reveled in lustful passions, claiming he could pick up more women at small groups than at bars, wrecking havoc in hearts through affairs, pornography, one night stands and sexual perversions.  He delighted in attacking God's church, and yet, he was strangely drawn to its light.  The juxtaposition of these opposing viewpoints was difficult to understand.

I came away from this story stunned by the power Satan can wield in the lives of believers, making them ineffective to the Kingdom.  As a Christian you grow up with knowledge of the temptation and lies the "accuser" uses.  But the delight Leeham describes in defiling the Church, the absolute demonic nature of his thoughts and the power he had to inflict evil, well...it goes without saying that it was just plain scary.  Sin is black, it ensnares us, we justify and glorify it in worldly living, and Leeham portrays an adversary who is dancing over our iniquities, fighting tooth and nail to carry us farther away from the Truth.

It is easy to focus on the darkness of this story, as it makes up the majority of the physical content of the book.  However, the redeeming nature of Jesus Christ is just incredible.  This book is dark, but darkness does not win!  In the end, Leehan comes face to face with the powerful love of Jesus, and nothing else can hold a candle to it.  While the dark details in this book might not be for everyone, the message is!  God is alive, God is love, God wins.  Satan is out to destroy this world, but he has already been defeated in Jesus' death on the cross.  The testimony of Leeham reflects this truth over and over again.  I walk away from this book even more convinced in the absolute power, grace and mercy of the gospel of Jesus Christ.  Praise God for Michael Leehan and his courage to testify to it!

Disclosure of Material: I received this book free from the publisher via Book Sneeze. I was not required to write a positive review. The opinions I have expressed are my own.
Posted by Rene at 6:51 AM