Forsaking All Others - Allison Pittman 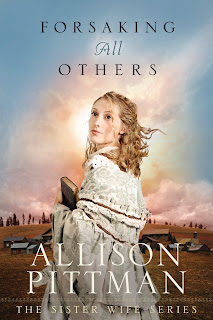 2.5/5
I really did not want to give Forsaking All Others by Allison Pittman such a low rating.  In all honestly, I love this author and I do not want to discourage anyone for reading her wonderful novels.  I just did not enjoy this book.  I'm not even sure if I can put a finger on the reason why, because it was very well written.  In fact, everything I've read by Allison Pittman is superbly done, specifically Stealing Home and The Bridegrooms - both excellent!  It is obvious that the topic was well researched, the time period came to life, and Pittman's writing style is both eloquent and descriptive, drawing you into her characters lives almost without effort.  But everything about this novel left me a little flat, in fact I was often tempted to skim pages, look for any interesting dialogue and blatantly wished that I could just skip to the end.
Forsaking All Others is the conclusion of the two-part Sister Wives series and focuses on the life of Camilla Fox, recently estranged from both her husband and the Mormon Church.  Camilla is found wandering in a snow storm after running away from her family, leaving behind two daughters and a husband in an attempt to flee from a faith she can no longer claim.  After being rescued by a handsome Army Captain, Camilla eventually finds the strength to cut ties with the Mormon community and start her life over as a follower of Jesus Christ.  Forsaking All Others focuses on this journey of healing, both physical and spiritual, and the path Camilla takes to gain custody of her daughters and introduce them to the true Christian faith.
I have to admit that I did not read the first book in this series, so that put me at a handicap for enjoying this novel.  I missed out on a lot of the chemistry that Pittman built between Camilla and her husband Nathan in the first novel.  I did not feel any sort of ties to him as a character and could not understand the draw and power he held over the Camilla.  Even more baffling was his willingness to let go of his children and give them up to his estranged wife.  Pittman spent much of the novel showing how faithful Nathan was to Brigham Young and the Mormons, it was the wedge that drove so deep between him and his wife that she chose to run away.  Nathan was willing to die for his Mormon faith and Camilla for her Christian faith, there was no way to reconcile those differences.  So in the end, I just did not believe that he would let his daughters go so easily, knowing that their Mother intended to raise them to oppose the Mormon faith.  Again, this is probably because I did not read the first novel and missed out on a lot of character development.  I had to trust that Nathan really did love Camilla and was willing to let her "win" because of this.
Ultimately, I just couldn't fall into the story as I hoped I would.  Pittman writes Camilla's character very well, doing a beautiful job of capturing the Mormon culture, historic locations, and many nuances of that time.  I enjoyed the first half of the book much more than the last, feeling that the final 100 pages or so were filler until the moment she is finally reunited with her children.  Although I did not fall in love with this novel, I do enjoy Allison Pittman and hope to read more from her in the future!

Disclosure of Material: I received a complimentary copy of this book from Tyndale House. I was not required to write a positive review. The opinions I have expressed are my own.
Posted by Rene at 11:41 AM