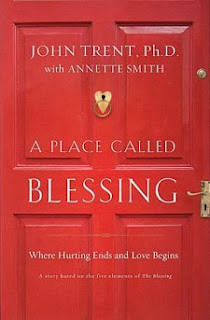 A Place Called Blessing, written by Ph.D John Trent, is an attempt to describe the method of "bestowing a blessing onto a relationship" from a fictional point of view.  I have not read The Blessing, the author's previous non-fiction book that delves much deeper into this psychological theory.  Still, it was not difficult to pick up on what "the blessing" is and the ways it was eventually communicated to the protagonist of the novel.

The story chronicles the life of Josh, an emotionally abandoned little boy who loses his mother and father and is separated from two brothers.  He is shuffled through the foster care system, unpacking his scant belongings at many houses, but never staying long due to his deep-seeded fears and issues.  At six years old, when it finally seems as though Josh might be forever reunited with his brothers, an unfortunate accident changes the course of his life.

Through adolescence Josh often acts out in anger and trusts no one, but through the first person narrative the reader gets to see a glimpse of the broken little boy who so desperately wants to be loved.  As Josh turns eighteen he rents a room from a mother and son who turn out to be the family he is so desperately searching for.  The journey they take together is painful and difficult, but Josh eventually finds the peace he seeks.

I very much appreciated the message of this book, especially the inside look at orphaned children and the foster care system.  However, the writing style is not especially proficient, often feeling jerky and simple.  Seeing as how the book is told from Josh's point of view, this at times works to the novel's favor, but often I found that detail and depth were sorely lacking.  Still, I would recommend reading this book as it beautifully portrays how a life can be changed by unconditional love.  I also think it calls attention to the failing foster care system in this country and hope it inspires people to look into how they might love another child and give them the gift of "the blessing" too.

Disclosure of Material: I received this book free from the publisher via Book Sneeze. I was not required to write a positive review. The opinions I have expressed are my own.
Posted by Rene at 10:15 AM